Back to all news

RIGO, a real must of the INTERIOR production signed by Arcluce, is renewed to give life to the new versions called RIGO31 and RIGO51 (natural evolution of the previous RIGO30 and RIGO50).
Characterized by the reduced thickness (36 or 52 mm) from which the name of the product comes, RIGO by Arcluce is a practical and versatile modular lighting system, capable of creating continuous and uniform lines of light along walls and ceilings, characterizing environments with functionality lighting technology and distinctive design. As for the previous versions, RIGO is available with direct and indirect light for suspended, ceiling, recessed (ceiling / wall) or wall installations via base plate (the wall version is not modular).

The innovations introduced in the RIGO systems concern numerous small but significant changes to materials, structure and electrical / mechanical engineering, which together contribute to offering improved lighting versatility, greater energy efficiency, further simplicity of installation mainly due to the new internal clip system and wiring with quick coupling terminals. Furthermore, the suspensions can now slide along the entire length of the luminaire body as well as the concealed ceiling fittings, making the desired positioning more practical.

The end caps, lightened and characterized by a more personal design, are now made entirely of painted die-cast aluminum and equipped with a practical magnetic fixing system; a small innovation that denotes the attention to the evolution of its products typical of the brand. 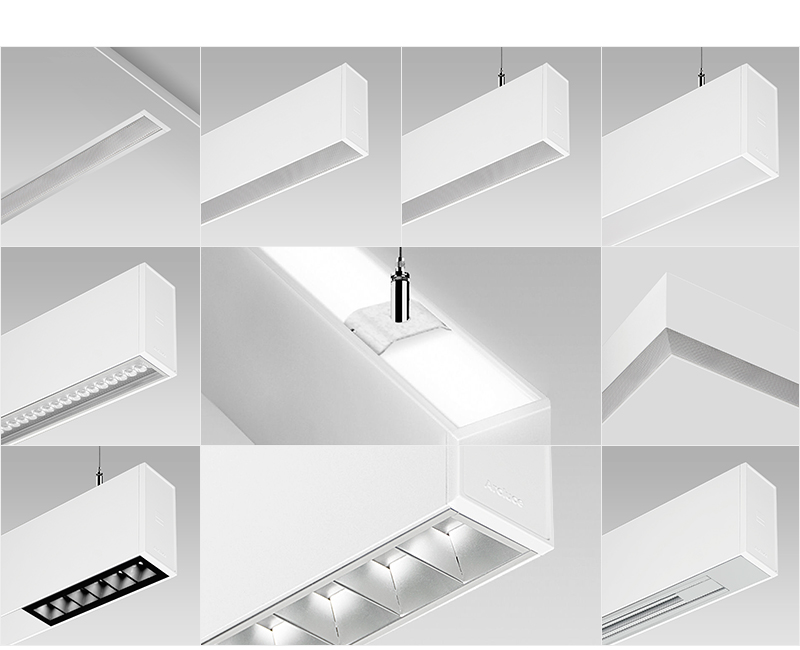 Arcluce RIGO is also available in pre-configured versions according to the application (codes complete with related accessories), for recessed, ceiling, suspended and wall installations.

Or choose the pre-configured version according to the application:

RIGO51 is also available in the binary module version, which can be fully integrated into the system, with a wide variety of products that can be installed: